What is a Schoolvision® Assessment?

In addition to a full eye test, it assesses:

How does it help?

Following the Schoolvision assessment, where spectacles or contact lenses are prescribed, and sometimes eye exercises......the benefits for your child may be: 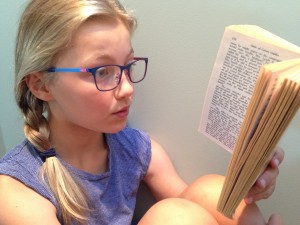 The whole concept of stable eye dominance and its importance was discovered in early studies in sports, namely clay pigeon shooting and tennis. Shooting is an “aiming’ sport (involving central vision) and tennis is an anticipation sport where depth judgement is the most imporant to assess positioning in the 3-D spatial environment. It was subsequently found that the exact same principles of “Sportvision” could be applied to reading, and hence “Schoolvision” emerged.

When we read a piece of text, just one eye (the dominant eye) should take over the job of aiming at the words. If both eyes are competing to do the same job, the words and letters appear to shift out of order, sending confused messages to the brain, which in turn causes difficulty with reading and spelling. Without stable eye dominance, attention will continually swap from one eye to the other. At the moment of swapping, the letter or word will shift position in space. You can demonstrate this by aiming at a distant object with your finger. When you close one eye, everything remains stable. When you close the other eye, either your finger or the object will appear to move. When this happens unintentionally while reading, you lose your place in the sentence or paragraph and individual words become difficult to learn or spell because the letters won’t stay in the right order.

In addition to stabilising the dominant eye, most individuals presenting with already diagnosed dyslexia also show a weakness of the “up close” focussing muscles (accommodative insufficiency). To prevent the print from blurring, someone with accommodative insufficiency must work their focussing muscles much harder than normal. In addition to this, the individual generally shows some weakness of the muscles attached to the outside of the eyeball (extraocular muscles), so it is important to ascertain which muscles are at fault, and in which eye. Generally, individuals with binocular vision instability will also display light sensitivity issues, so different depths (saturation) of different tints (hue) will need to be selected, avoiding those with peak spectral sensitivity e.g. yellow, pink and edging toward the blue, teals and greys. Hence prescribing therapeutic spectacles (often for both distance and near) encompassing all of the above issues will benefit the individual immensely. Follow-ups will range between 3 months, 6 months and 12 months depending on the initial results obtained. Lens changes may be needed as the tightly knit accommodative vergence system begins to “unwind” of “unravel” itself. The therapy component is simply performing regular school and homework tasks while wearing the prescribed spectacles, allowing the dominant eye to develop skills in tracking.

The evidence of the concept of Schoolvision comes from a research study of Year 7 pupils from the Moreton School in a deprived area of Wolverhampton (1996, Geraint Griffiths), showing that 60% of the pupils had predisposing signs of dyslexia. On the first screening, it was apparent that at least 30% of children tested had visual problems amenable to correction which were holding back their visual development. An extended study involving 14 of these pupils over a 3 month period showed a dramatic improvement. Positive behaviour and visual improvement were measured and recorded and reading speeds increased by over 100% in these pupils.

The principles of Schoolvision are simple, but yet the effect is profound. It’s like revisiting the “old optics” of 80-100 years ago; the ones that have been pushed aside and forgotten as the commercial gain and the “conveyor belt” mentality took precedent in the whole optical industry. We all know we are on the right path here when we see benefits to the children such as better school performance, increased reading speed, improved arithmetic, increased self-esteem/confidence, clearer writing, increased concentration, descreased tiredeness and anxiety, reduction of headaches and migraines, calming effect (in children with hyperactivity) and the general reducing effect of disruption and delinquency.